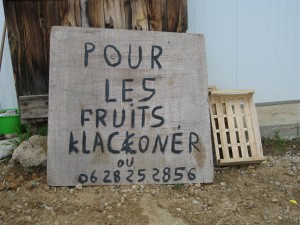 I have just popped up to our neighbour Yves, who lives at Jean Gros, to get some apricots for jam. We love his sign, which obviously caused some scratching of heads when first created, but he must be satisfied with it now as it comes out every year! 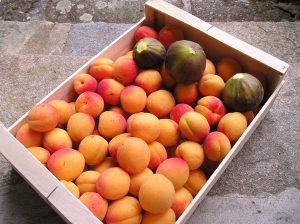 He noticed me admiring the enormous figs on his tree – I have never seen such huge ones, they are the size of a peach – and he cut me off a few with his opinel while we talked about his mulberry tree. 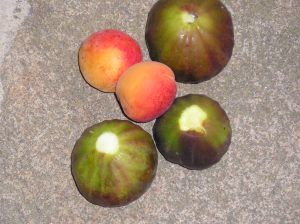 Most of the mulberries around here were grown for their leaves, which were fed to the silk worms, and have tiny white fruits which are pretty insipid . At Jean Gros there are two vast old black mulberry trees which produce enormous, juicy and delicious fruit. They drop onto the lane, staining it black and I have always been curious to know why they did not pick them – Yves is a fruit farmer after all! He told me that he does not like mulberries, although his grandmother used to eat them. This winter a huge bough blew off one of them and he had to cut it back severely, but it is springing up again and we agreed that such venerable old trees are still very vigorous. He says that he has noticed walkers picking a few fruit as they pass his farm and he does not mind. I am glad to hear this since I have always felt a bit furtive as I snaffled some on my way down from Bozas! I told him that we have considered trying to graft from his tree. He looked at me a bit quizzically but said I was welcome to try. The trees were planted by his grandparents and have not been grafted so if we were to be successful we would have exactly the same tree and the same fruit. After how many years though I wonder! 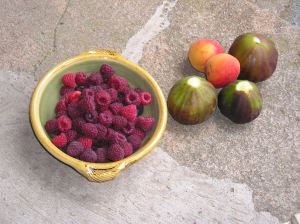 He also let me have a bowl of raspberries – and all for under 10 euros. Let the jamming begin!