Vroom vroom!  There is an even better French word, le vrombissement, to express the exciting sound of cars with seriously souped up engines racing on our tiny twisty roads.   The  Monte Carlo Rally is back!

The Rally, which began in 1911 as an aristocratic winter race from any departure point in Europe down to Monte Carlo, takes place in January, with two full day stages our corner of the Ardèche. Around eighty cars started out last Wednesday, but by the second day when we went to watch as they raced from Lamastre via Gilhoc to Albousière numbers were already down. The narrow roads, steep gradients and sharp bends had seen off about twenty contestants. 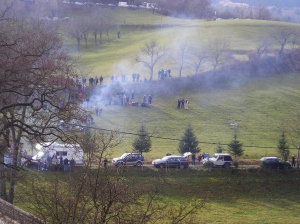 We were surprised to see so many fans following the race – there were cars from Italy, Spain, Germany and Switzerland as well as from all over France and although it hardly rates as a spectator sport, the atmosphere was very good humoured, with neat little fires to keep gendarmes and spectators warm and a van selling mulled wine and the curiously named andouillette américaine. Every two minutes a car roared up, spitting and backfiring like an angry dragon, careered over the little bridge and tore off uphill towards the village, setting all the dogs barking. Definitely boys with toys! Then it could be heard revving away through the woods above the village before finally disappearing over the hill, leaving only the sound of the stream and the birdsong.