Assiduous readers of this blog will have noticed that Markus is deeply involved with the vines at Morlanche. He has always dreamed of having his own vineyard and by helping the family to keep this old one alive he is able both to learn and experiment the different techniques needed to maintain and hopefully revitalise the old Gamay ceps.

January 22nd, St Vincent’s day, is traditionally thought to be an auspicious date to start the winter pruning. Various reasons are attributed for this choice – most of them somewhat far-fetched, such as the fact that the word vin is contained in the Saint’s name, that he may have been martyred by being crushed in a wine press and that his hungry donkey chewed at the vines in winter, thus inventing the notion of pruning. More prosaically this is probably just a good time, when the plants are completely dormant. Pruning too early means struggling with foliage and springy stems, too late and the vines weep distressingly copious tears of sap. 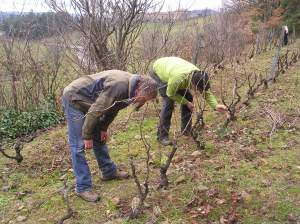 So here he is with friend Amaury studying each plant carefully to determine how to encourage vigorous and crucially, fruit-bearing, new growth. They spent a couple of days in the vines, enjoying the quiet short days of winter, the birdsong and the hazy sunshine. There was not a lot of conversation, because they say that each plant presents its own conundrums and the job requires a lot of concentration before making the fateful cuts. Presumably a lifetime’s experience makes the job a bit easier!

Various other family members stopped by to help, and the newest baby girl was much admired in the kitchen whilst the lunchtime roast boar was being prepared.

Now the vineyard looks trim after its new haircut and there are neat bundles of cuttings ready to be used on summer barbecues. The next job will be to till over the soil between the rows and work in a load of manure – we don’t know if there is a patron saint for that task!