We were in Paris for a couple of weeks being sophisticated, which was fun and a good break, but no sooner are we back down here than the pace picks up again. We are lucky to have our gorgeous base in the capital but we are frequently struck by the anonymity and regularity of life in the big city. Somewhow everything potters along in the same old way; bad weather is merely an inconvenience rather than a challenge to be embraced, social contacts tend to be reduced to aggressive encounters between you on your bike and a taxi in a hurry and the shops are full of stuff you don’t really need but are tempted to acquire.

Back at les Sarziers there is never a dull moment. At this dead time of the year, with the cows inside and the fields asleep, the locals are fellling timber and dealing with other maintenance jobs. We are following suit and attacking the renovation of a roof.

The little house (known as the Doghouse) where we live when we have Walksweeks guests in the main house, has been sagging for a while. The roof was put on eighty years ago, when the building was constructed. At that time, a well was being dug to irrigate the garden of the house next door and the excavated stones were used to build a garage with an upper floor. The creation of the Doghouse was our first attempt at renovation before we attacked the main house.

Bernard, the local builder has come up with a brilliant solution. By creating a new roof over the old one, we are able to keep our cosy boarded ceiling whilst installing two roof windows and a wood burning stove. It’s a pricey job though, and to keep the costs down we opted to take off the old tiles ourselves and prepare the roof for the big boys.

Work was due to start this Monday, and Bernard showed up with the bad news: there has been a delay making the main new roof beam, which will not be ready until the end of the week. We all know the stories about unreliable builders and their deadlines, but we had a trick up our sleeves!

So here we are on a lovely sunny Monday morning up on the roof removing the old tiles. (Click on one of the pictures for a larger version).

We got on at a cracking pace and by mid afternoon we had them all piled up ready for the lorry. Bernard had to confess himself impressed! The lorry duly backed up in front of the garage door and we enjoyed ourselves chucking in the tiles from a great height. We have kept a good few – you never know when you might need to roof a woodshed or a dog kennel – but the rest are for the dump.

Our next job was to remove the laths that the tiles had been hooked over, brush and vacuum the roof and then treat it with insecticide. It was a bit alarming being perched so high up on the ancient and slightly rotted boards, but the view is terrific and it was interesting to find old corn cobs, lime seeds and a ton of empty snail shells in amongst them – the leavings of generations of rodent residents who had made a cosy home in the insluation material and gorged themselves into hibernating insensibility.

By Tuesday lunchtime we were pretty knackered and inside having a cup of coffee when Bernard appeared again, slightly anxious this time. Without our noticinig, it had started to rain and he had come to see how we were getting on. The ball was by now firmly in his court and before dusk a burly and monosyllabic chap had turned up to attach the plastic covering which will be the first insulation layer of the new roof. Result! It would seem that if you need to pin your builder down on his dates there is no better way than removing your own roof! 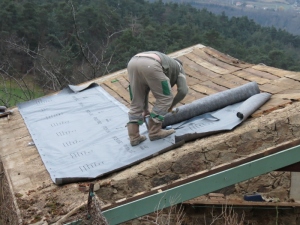 Meanwhile, there are crêpe pans on offer and deals on eggs and flour in preparation for the traditional pancake-making for chandeleur this Sunday. Roger is finally having his operation and we are popping in regularly to keep an eye on his aged mother, who will be alone in the farmhouse. The days are slowly gettitng longer and life in the country keeps up its busy pace.

2 thoughts on “On the Doghouse”