“En mai fais ce qu’il te plait” has roughly the same meaning as “Ne’er cast a clout till May be out” but the sense of doing as you please could equally apply to the bonanza of public holidays which occur this month.

The annual cycle has its own particular rhythm in France which, whilst it can be annoying if it catches you unawares and out of petrol, has a certain charm once you know how it operates. In August, the whole country shuts up shop and everyone, from builders to doctors will tell you “Oh can’t get that started until La Rentrée“, meaning September, when all the world goes back to school and work. From then until February everyone knuckles down and keeps their nose to the grindstone with only the briefest of breaks for a couple of huge meals at Christmas and New Year, but only one day off work for each, and none of the frenzied efforts by furniture stores, as in Britain, to get you a new sofa delivered before Christmas!

Things loosen up a little in February for the half term holidays. The French have a very slightly sheep-like attitude to holiday destinations and there is such a national rush to the (French) Alps, that the country has had to be divided into three school zones to cope with the crush on the ski slopes.
Easter goes by with just a nod. The school terms are so out of sync by now after the skiing break that this year not one area was actually on holiday over Easter itself. . . .

And then comes May!

Many English visitors are disconcerted to trip up over so many unexpected public holidays when, in smaller places, everything except the all important boulangerie pâtisserie will be closed all day or indeed for several days, depending on how some of the moveable feasts fall that year.

May 1st is a public holiday celebrating workers’ rights but is more traditionally thought of as la fête du muguet. Small bunches of lily of the valley are offered for sale and it is customary to bring a sprig as a little gift, for good luck. May 8th is the next, commemorating the end of WWII and there will be an official ceremony and wreath laying at the Monument aux Morts in every town and village in France. The same of course happens on Armistice Day, November 11th, which is celebrated on the day itself rather than, as in the UK on the closest Sunday. It is worth noting as well that there is never any religious element to these ceremonies – the church and state being firmly separated.

Indeed, in such a fervently secular state it seems surprising that the religious feast days of Ascension and Whit Monday are also bank holidays, together with the Assumption on August 15th, although Whit Monday is now a bit of a grey area. After the scorching summer of 2003, when France was horrified at the number of elderly people who died alone of heat related complications, the government decreed that Whit Monday would no longer be a public holiday and the tax revenue collected from work on that day would be devoted to better care in the community for vulnerable pensioners. There were rumblings, but it is now a semi bank holiday, 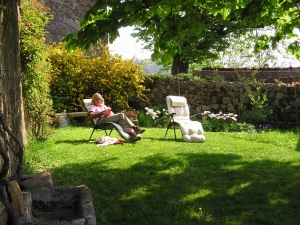 which means you really don’t know where you are.

Ascension day always falls on a Thursday, and generally gives rise to a long week end, or pont but in some years, the combination of dates can occasion a whole run of holidays, known as a viaduc and vastly unpopular with employers. This year May 1st falls on a Wednesday, which is generally thought a bit too long to make a bridge, but the 8th is another Wednesday with Ascension on the 9th so we are preparing for a big influx of visitors with buzzing markets, sporting and cultural events and the season generally getting into gear.

People here find it puzzling that Britain has only 8 public holidays compared with 11 in France, and no equivalent to the 14th July. Certainly a sage and serious government has ensured a more even distribution of jours de fête in the UK, but there is something charmingly frivolous about May in France which, especially after this year’s dismal winter and late spring, marks an optimistic opening of the door to summer. License indeed to do as we please! 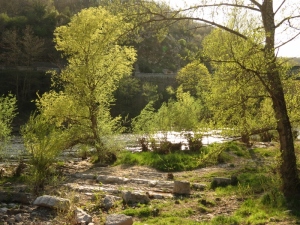