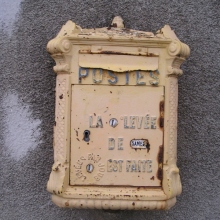 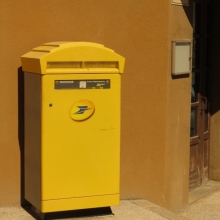 At the beginning of the summer the post lady stopped her little yellow van and, as she handed us the day’s mail said rather cryptically “vous n’avez pas idée d’ installer une boîte normalisée?”

Words like conventionné, co-ordonnées, protocole, regularisé and suchlike are apt to strike fear and dread, speaking as they do of arcane beauracracy and unknowable procedures with their attendant obscure conventions and vocabulary.  We realised immediately that something had to be done.

In the first romantic flush of owning les Sarziers, we wanted everything to be as authentic and untouched as possible.  We agonised for weeks about just how much soot to remove from the blackened beams in the kitchen, how to civilize the attic without obscuring its spectacular roof timbers, whether it was insensitive to tile the kitchen floor, sacrilege to create a new window, mistaken to install a woodburning stove in the vast hearth, in place of the smoky, inefficient but madly echt log fires and so on and so on.  We wanted the house to come alive gently but appropriately, as though we had fast forwarded it through a hundred years or so: retaining what was possible, adding what was probable and creating what could be accepted as credible.

So to the letter box.  In our search for authenticity we realised that there would have to be limits.  We were not going to be able to get away with something like this.

However we were quite adamant that we wanted neither a soulless modern steel construction of approved dimensions nor a twee homemade contraption somewhere between a wendy house and a nesting box and we found, in the closing down sale of a hardware store, one of the slim old-style tin letter boxes from the time when envelopes were small and mass mailing was unheard of.  We labelled it with our names and stuck it on a convenient bit of ironmongery left over from when the courtyard had gates.  Over the years it rusted pleasingly and the rain washed our names off.  Circulars and catalogues poked soggily out of the top to greet us if we had been away for a while but we were used to it and M Mer the postman never complained. 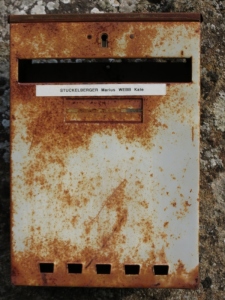 When he retired, the young woman from St Félicien who took over proved to be even more considerate.  She will happily bring oversized envelopes, catalogues or circulars up to the house, where she puts them in the mesh-sided box for storing cheese or pegs them jauntily to the peg basket.  If we should be out when she has to deliver a particularly bulky item she will stow it away unobtrusively and leave us a yellow post-it note telling us, in guarded terms, where she has put it.

Then one day La Poste itself took action.  A neatly typed label appeared on both our box and the dilapidated rabbit hutch that receives Roger’s communications from the outside world.  Officialdom had obviously spoken and we were absolutely delighted by what it had said.  Although the pitfalls of Stuckelberger had been negotiated without a single mistake, Markus discovered that he had been renamed Marius, which he takes as a great honour!

However we both felt that this was the thin end of the wedge and that officialdom would soon have more to say about our romantically inappropriate letter box, so when the dreaded word normalisée was pronounced we jumped to it.

In the local DIY store the following day we discovered  that there are two officially approved dimensions for letter boxes, according to whether your house was built before or after 1979.  Happily the pre 1979 format  fitted into the width of the courtyard wall and Markus was able to set it at the perfect height so that the factrice would not have to get out of her van any more in order to deliver our mail. 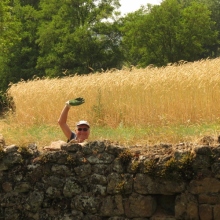 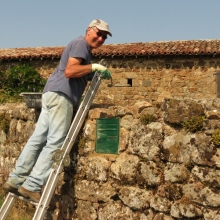 It was a half day job and in the end corresponded to all our criteria of authenticity, which have admittedly been tempered over time with the needs of practicality.  (We took pains of course to make a new label, perpetuating Markus’s new incarnation in his authentically Ardéchois persona of Marius).

We were out next morning when the post was delivered but later, on opening our new letter box, we found the mail with a post-it stuck on one of the envelopes reading “merci pour la boîte normalisée” !