The Esplanade is definitely not looking at its best!  Although pretty with primroses, violets and speedwell it has come under serious attack from an army of moles who moved in over the winter and have been trundling about industriously ever since, leaving molehills everywhere. 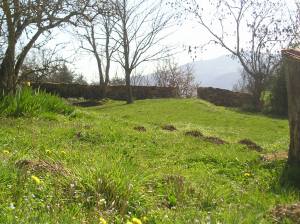 As everyone knows a mole will go where a mole wants to go and getting rid of them from what you consider to be your sacred lawn, flower bed or veg patch is almost impossible.  Markus found some depressing statistics somewhere to the effect that the average gardener tries an average of 2.5 methods of which an average of 93% don’t work.

Our local agricultural merchant has a wealth of optimistic solutions on offer.  There is the méthode canadienne, a sadistic operation involving chopping up earthworms and lacing them with cyanide, which we have vetoed as too barbaric, ultrasound devices which somehow you know are not going to work, traditional mole traps and various explosives with names like Boum Taupe, Taupéclat and suchlike.  Click here for a hilarious promotional video for one of the more sophisticated versions.  You might think that such méthodes pyrotechniques would be completely illegal but perhaps they have somehow escaped the vigilance of Brussels, so far at least.  There is a long tradition of such warfare in rural France.

We once noticed a couple of ancient wooden crates in our neighbour’s barn uncompromisingly labelled dynamite.  We imagined clandestine wartime Resistance operations and pictured him in his ancient Traction Avant at a secret rendez-vous by the railway line at dead of a moonless night.  It was only later we learned that vignerons had, and still have, a special dispensation to purchase small amounts of explosive to blast out the roots of old ceps if they are renovating the vineyard.  (This is giving Markus interesting ideas!)

More prosaically, and peacefully, we think we might try a remedy which worked for us some years ago.  An very elderly lady from a neighbouring farm gave us an envelope in which she had saved what she called graines à taupe and told us to sow them in April.  She guaranteed that the flowers would see the little blighters off – and they did.  We cannot remember what the magical plant is, but we still have a few of the seeds somewhere and it’s clearly time to give it another go.