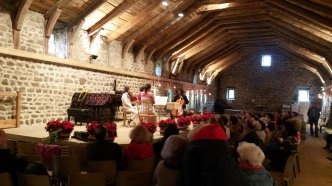 Well it actually started the evening before at the magnificent Grange de Clavière at St Agrève, which hosts a classical music festival every summer. We were entranced by the superb Quatuor Capriccio, (seen here in rehearsal a few days later) playing Schubert and Mendelssohn and had the opportunity to compliment them in person at a very convivial reception after the concert.

We got home at 2 a.m. and were up again at 6 to get ready for the brocante in Lamastre. We arrived at around 7.30 – one of the last stalls to set up – and laid out our assortment of bits and pieces in a very cheerful atmosphere. At around 9.30 the event organisers paraded this splendid pogne , hot from the oven of Thierry the baker, through the market stalls and we were all invited for a slice with a cup of excellent coffee. 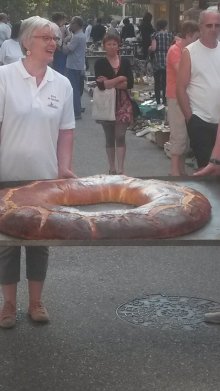 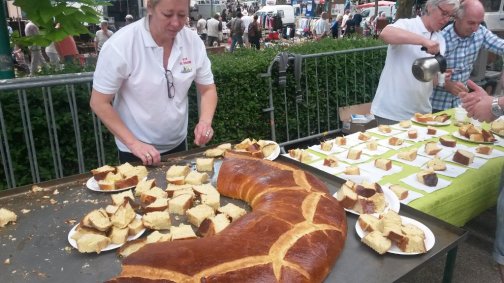 As the morning wore on our stock diminished pleasingly. We were particularly happy that some loved but superfluous items went to charming people who were delighted to find them. It is nice to imagine pieces going to a good home and enjoying a new lease of life. Many friends stopped by to chat or pick up something from the stall, (one of them seized on my past histories of the Archers and has happily spent the last few days in Ambridge) but by one o’clock all right-thinking people were à table and it was time for us to pack up and get going. Back to les Sarziers and a quick change of pace as we set up for the concert with Kalynda and Vincenzo Solo. 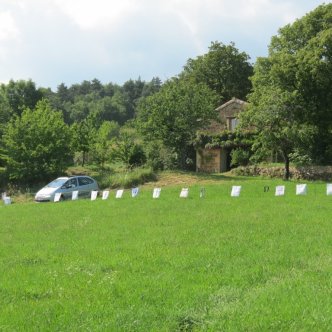 This was a bit of a gamble for us as, unlike last year’s Jazz aux Sarziers which was a private party, this was a semi public event. People had been asked to bring along something to eat and drink and we had no idea how it would all work out nor how many people to expect. In the event around 70 guests showed up, including friends, neighbours and quite a number of people we had not met before or who were staying in the area and had heard about the concert on the grapevine. 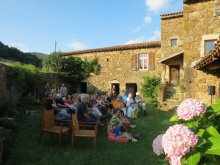 The evening was a spectacular success with wonderful music and great, friendly atmosphere. The supper contributions were plentiful and inventive and everyone chipped in setting out the buffet and organising the drinks. 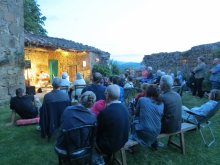 Although both Markus and I were flying around all evening – he also performed with Kalynda on five numbers! – we made new friends and caught up with old ones. Les Sarziers worked its magic once again and before we knew it we realised that it was two in the morning . . . 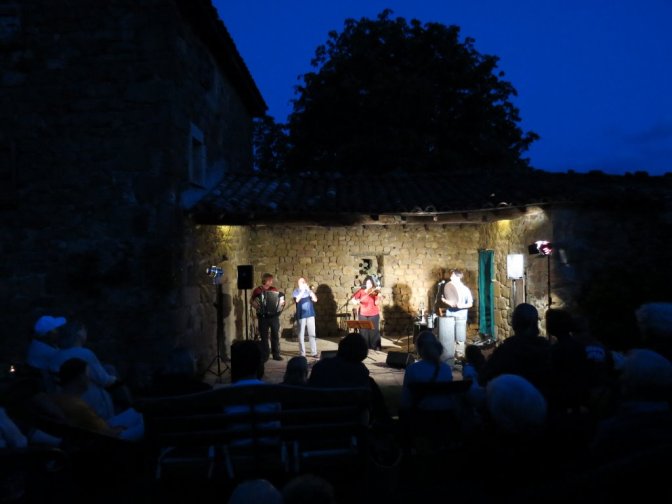 And they say the pace of life is slow in the country!

One thought on “A quiet day in the country”