For the sixth year running, Arlebosc has held its most ambitious event of the year and once again, despite the awful weather we have had this summer, the sun shone all day.   The choice of date is a clever move, the last Sunday in August, just before la Rentrée when everyone is back at home, ready for school to start and looking for a family outing to round off the summer holidays.  The event has become the biggest local draw for fanciers of vintage agricultural machinery and Sunday’s procession of more than 20  tractors through the village – eloquently described as une pétarade – preceded by the combined brass bands of two neighbouring villages, was definitely a highlight.

Markus had been designated official photographer and was on hand and snapping away all day, from the open air Mass which kicked off the festivities to the piglet race at the end of the afternoon.

The Reboule is a traditional celebration to mark the end of the harvest and its revival in Arlebosc has proved tremendously successful, drawing an impressive crowd. There was a really good brocante plus handcrafts of all kinds for sale, including Fernand’s handmade Ardéchois baskets. 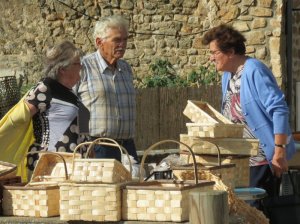 There was an excellent photo exhibition at the Mairie, a tethered hot air balloon, candy floss, a roundabout, pony rides and a wonderful selection of wooden board games of the shove ha’penny variety for the children.  As the afternoon wore on the two-handed sawing contest became increasingly animated and impressive.

The barbecue had been going since early morning and we heard later that over 800 lunches were served.  Very good they were too with jambonnette to start with, tomato salad, grilled pork, frites, local cheese and a home grown peach for dessert. 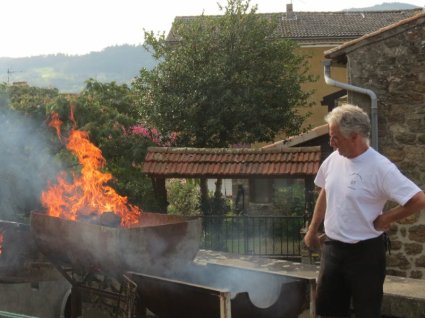 There was music and line dancing and the buvette did a roaring trade all day.

But undoubtedly the main attractions were of the strictly agricultural kind.  Along with the tractors were exhibited a huge variety of inscrutable items of machinery for winnowing, cutting hay, twisting rope, sawing or apparently for simply puffing away importantly.  Several vitage cars were on show including a couple of beautiful black Traction Avants.

After lunch the tractors were hitched up to an assortment of ancient ploughs whilst enthusiastic teams  guided the plough shares, an event to which the photos hardly do justice, since it is very athletic and requires a good sense of balance and a certain amount of daring. 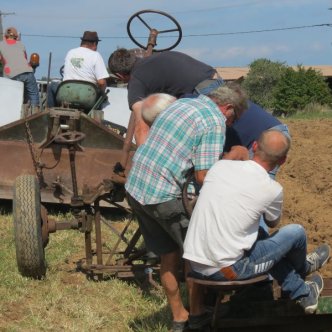 And all through the afternoon, Roger’s wheat, which we had seen cut and bound in the field above our courtyard, was being threshed using this hundred year old belt driven threshing machine called Albertine. 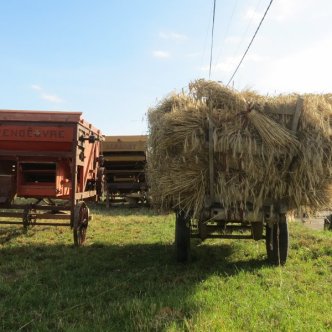 The following morning the sacks of grain and bales of straw were brought up to be stored in Roger’s barn, bringing the cycle to a close.  Poor Roger is in desperate need of a hip replacement operation, but is stubbornly soldiering on using crutches.  He cannot drive his tractor at the moment  and who knows what the outcome will be, but for this season at least a solution has been found for his wheat harvest combining a popular event, a celebration and the traditional rural solidarity which still operates in an unobtrusive but satisfyingly effective way. 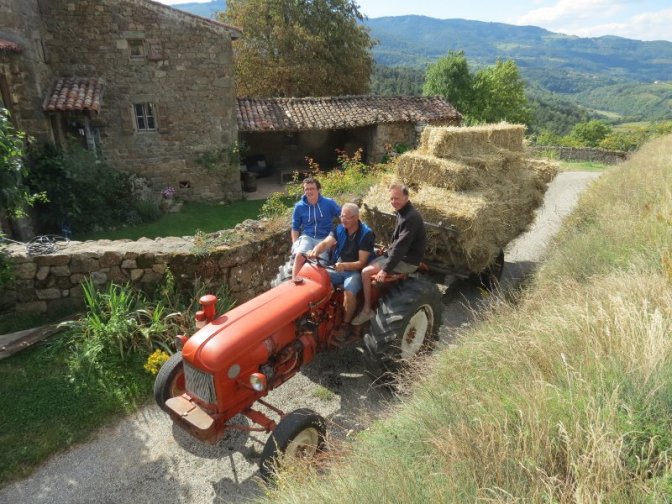 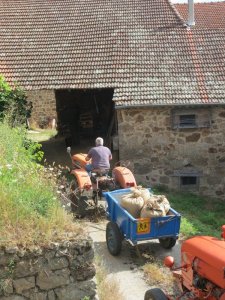