We rounded off the day with a party and jam session (called a boeuf in French for some unknown reason) at the Gallix farm. 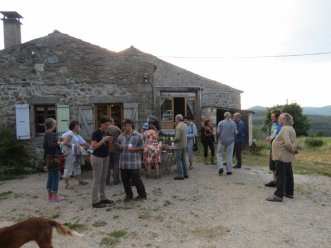 About seven years ago François stepped back from an international career and non stop touring to settle with his family at the farm which had once belonged to his grandfather and is now worked by his brother Thomas.  Thomas produces honey, chestnuts and scrumptious fruit juice and François is mainly involved in the forestry side of the enterprise though he helps out when there’s a lot on.  Together with their enthusiastic WWOOFers, they had just picked 30 tons of the little Ardéchois pears which grow semi wild round here and taken them to be juiced, before attacking the apples.  Their grandfather had planted several old species which are now hard to find, along with the more traditional reinettes (russets) and canadas.

François is in contact with a huge network of world class musicians who are happy to come and play at the gigs he organises in various locations throughout the year and especially through the summer.  For some years the most popular summer fixture has been the Mardis Jazzy in the Lamastre microbrewery “Les Chopes du Moulin”  and we are all sorry that Joann, who owns the brewery, is selling up and moving to Quebec.

So the party was a wrap up of the season and to mark the end of Jazz at Les Chopes.  Who knows what next summer will bring, but our area is full of initiative and surprises and something new always seems to be just around the corner.  If one door is closing no doubt another will open.

Markus has been playing regularly at the Jazzy Tuesdays and also rehearsing every week with  François’s wife Linda on piano and his friend Hans on trombone.  A few weeks ago François’s trio was booked for a private party given by our neighbours in Arlebosc and Markus and Hans played nearly the whole gig with them.

It was a great evening and something of a revelation for the Arlebossiens who had been invited and had not known that Markus plays the trumpet.  So along with his talents as photographer it looks like he may be requisitioned for any village event which might require a brass instrument.

The angel Gabriel for the Annunciation perhaps . . . . ? 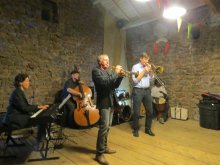 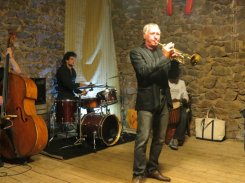 STOP PRESS Last night, already on the way to a concert at Marie Café, where Linda was playing as a duo with Pierre Lafrenaye on trumpet, Markus got a call from her to say that Pierre’s car had given up the ghost, he was stranded in the middle of nowhere and could Markus do the gig with her. It was by all accounts a triumphant success. I am just so sorry that I could not be there!