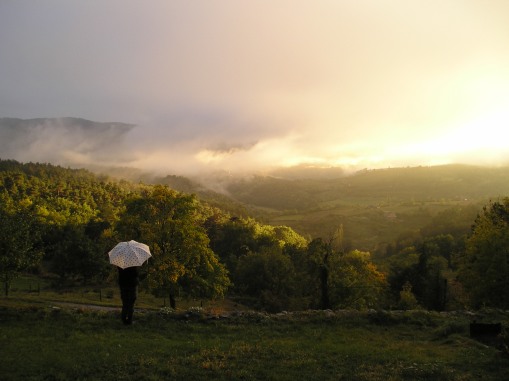 It is rare that I am doing the blog entry, but since I am not cutting down trees, laying a floor or building a wall I have some time on my hands and since it is about weather it seems to be appropriate that you get the specialist’s opinion. Up until now I kept it quiet that I was a Beobachter in the Swiss army – that means I was responsible for observing the weather. Now you know – ask me before you start World War III.

It is now the very end of November and the ninth time this year that we have had un épisode cévenol, the heavy rain storms of Southern France that cause devastation, floods, up-rooted trees and landslides.  In an average year these storms occur two or three times, but this year they returned again and again.

What is it?  It is a short spell un épisode of torrential rain and thunder storms caused by the Cevennes mountain range cévenol that catches the moist air from the sea. As the air rises it pours most of the Mediterrenean on to the hills between Nîmes, Arlebosc, Vaison la Romaine and St.Tropez.

Joel Collado, the French Weather Guru patiently tries to explain this on the radio. According to him it happens only in the autumn, when the temperature of the Mediterrenean is still high in relation to the cold air coming from an Atlantic depression, a low pressure zone which is further South than usual. That’s why in Paris the weather is often splendid while the Rhône is breaching its banks.

When asked whether this is the worst year ever, he seems to be a bit coy – just saying it is very bad.  Who knows, it might have been worse in 1514!

Our concerned friends often ask whether we are OK at Les Sarziers, probably imagining floods like the ones that caused so much distress in Somerset and other areas of England last year.  In fact the water never really threatens us.  It is the effect of erosion that can be a danger to the roads, walls and hillsides around us.

During storm number seven three weeks ago, part of Roger’s field got dislogded and ended up on the Route Departementale as if a giant carpet had been swept from under the cows’ feet (luckily the cows were somewhere else).

The effect of these rain storms in our hills is an awesome illustration of brutal natural power.  When the swollen streams finally hit the bottom of the valley and the space for all this water gets scarce, the rivers swell at an incredible speed.  The difference of the water level in the Doux below us can be up to 20 feet in a few hours, as happened in the flood of 1963.  And as everybody in Arlebosc will tell you, it was the day of  the postman’s wedding, and that the water carrried a caravan over the Boucieu bridge.  In 2003 Arlebosc was in the news when a villager was swept away after his car got stuck a few yards before the bridge.  So the best thing to do is to stay indoors (not what I learned in the Swiss Army) and that’s why I am a bit short of my own pictures.