Although we have no pretentions to being in Provence as the term is now understood, the Haut Vivarais where we are was well within the historic region of Languedoc.  It took its name from the southern language, of which provençal was one dialect, which finally lost out to the Langue d’oil of northern France when the area came under the control of the Frankish kings, who decreed that theirs was to be the single official language.  Along with speech, now mostly differentiated solely by the charming southern twang, there are specific traditions belonging to the south one of which is the Treize desserts de Noël.

At the time of Louis XIV the people of Marseille used round off their big Christmas meal le gros souper du reveillon, held on December 24th, with all kinds of fruits and sweetmeats, together with twelve small bread rolls and a large one, to represent Christ and the apostles.  This was perhaps just a marseillais tradition but all over Provence you would find the four “mendiants”, or pachichois in occitan, which have been eaten since Medieval times at Advent, Lent and Easter, representing the four mendicant religious orders, with walnuts for the Augustinians, almonds for the Carmelites, dried figs for the Fransiscans and dried raisins for the Dominicans.  Another provençal speciality is the “pompe à l’huile”, a kind of brioche made with olive oil, flour and orange or anis water which must be broken as at the Last Supper, and not cut, for fear of bankruptcy in the year to come, together with fougasse, a flatbread made with olive oil and usually shaped into a rough rectangle and slashed to resemble an ear of wheat. These different elements were formalised by Frédéric Mistral, father of the renaissance of the provençal dialect and gradually became known as the “traditional 13 desserts”.  There is considerable argument about which thirteen items should be included but it is generally agreed that the essential ones are: apples, green (or winter) melon, pears, grapes, white and black nougat (symbolising good and evil), the four mendiants and the pompe à l’huile.

Some variations are permitted, for example candied fruit, such as cedrat, chestnuts, quince cheese and grape or fig jam and oreillettes – wafer thin morsels of fried dough flavoured with orange water.  The only non native fruits allowed are dates and oranges which evoke the flight of the Holy Family into Egypt and certain local delicacies may be granted a place at the table, such as the little lozenge shaped almond sweets from Aix, called calissons. The thirteen desserts are served either before or after midnight mass on 24th December, on a table decorated with three candlesticks representing the Trinity.  They stay on the table until the 27th.  All thirteen must be presented at the same time and guests must sample each item.  Frequently children are not allowed to start until they have named all thirteen. 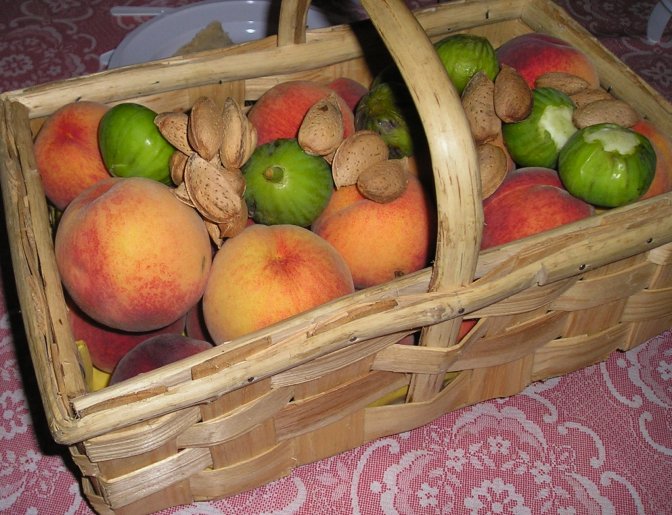 One thought on “Christmas pudding anyone?”