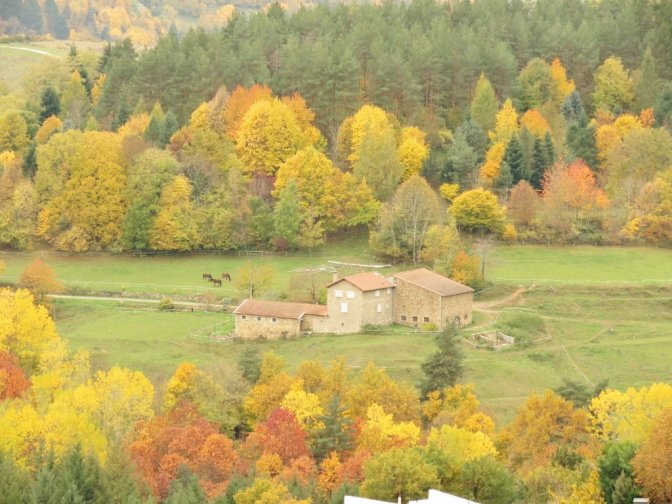 The autumn colours are magnificent this year, which is rather a surprise since we had thought that the unusually hot dry summer would have burned the leaves to a crisp. In fact, compared with the last great drought of 2003, it was noticeable that although no rain fell from May to September, last year’s miserably wet summer and high rainfall over the winter had boosted the water table to such an extent that the vegetation remained relatively unscathed despite the fact that the topsoil was completely dried out to a considerable depth.

Anyway, we thought we’d go for a walk and get some pictures of the spectacular show. We set out along the route of the Rando Croquis, adding in a few variations of our own and, just as we were having a word with a friendly donkey, we noticed an enthusiastic and amiable dog bounding up the lane towards us.  We passed by his house but he showed no interest in returning home and, since our walk was a circular one, we decided that there was no harm in letting him accompany us: we could drop him off on our way back. 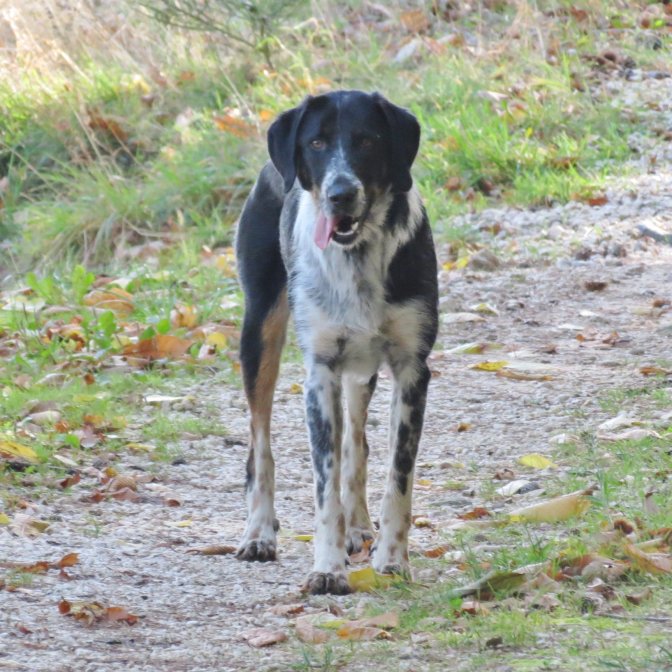 He turned out to be the most delightful company. A young dog, curious and interested in everything, he was constantly distracted by butterflies, interesting smells, and intriguing holes in the bank which needed investigating.  We christened him Thunderpaws because of his habit of racing up at top speed from one of these interludes and crashing between us in order to get ahead and lead the pack as any self respecting dog should do.  His personal habits were somewhat disgraceful – he triumphantly retrieved a very bedraggled dead rabbit from his cache in a cherry orchard and brought it to us for our inspection and he tended to roll in anything nasty he came across – but he was fun, alert and responsive. He behaved impeccably when we walked through the village, resisting provocation by a fenced-in Rottweiler and heroically ignoring the demented growls, howls and barks of assorted hunting dogs trapped in their enclosure. 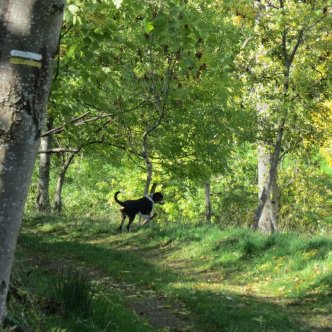 Thunderpaws got rather impatient when we stopped for Markus to take these great photos and showed no interest in collecting walnuts but he generally found enough to amuse himself and we got him home by lunchtime.

It’s not the first time that we have been temporarily adopted by someone else’s dog. 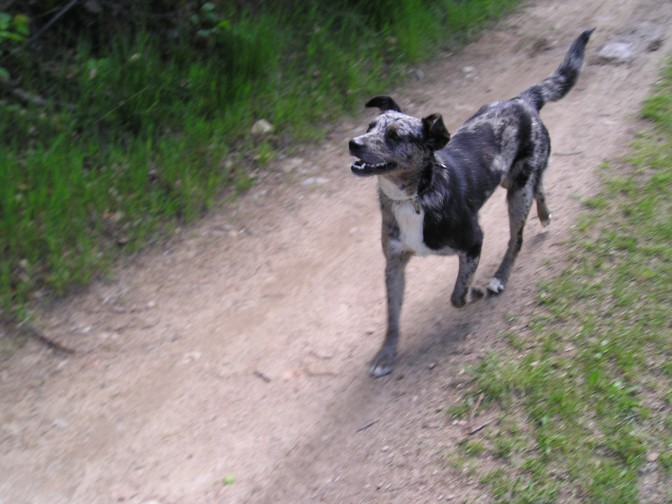 This one met us at the Col de Fontfreyde when we were doing early mapping out of routes in preparation for the launch of Walksweeks. We were in the middle of nowhere but the dog took our appearance totally for granted and simply set off with us on our walk.  After an hour or so he waved his tail in farewell and cut off through the woods down to his farm way below the track.  We did not know him long enough to give him a name.

Bounce however, became something of a friend. 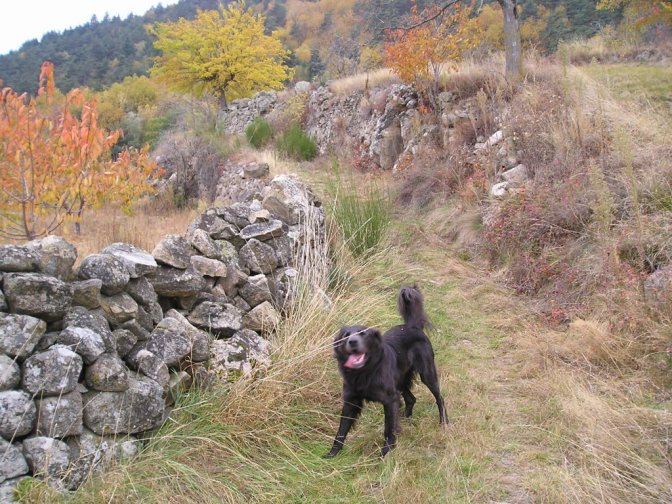 He bounced out at us from his house in the forest, where he was obviously getting bored, and simply refused to return home. We were at the furthest point out on a very long walk but there was no persuading him.  He just bounced along in front of us, delighted to be going wherever we were.  Apart from disgracing himself with some chickens as we passed through a farmyard he was no trouble at all and three hours later we all fetched up at les Sarziers, where he drank a large bowl of water and looked around to see what would happen next.  We found the phone number of his owners and suggested to them that we could bring him back in our car, which we did, Bounce taking the whole adventure totally for granted and sleeping soundly throughout the journey.

The following Spring we were amused to see party of Walksweekers returning from the same walk with Bounce in tow! We drove him back once again to the house in the forest and this time were rewarded with a huge bag of Valrhona chocolates – his master works in the lab there.

This lovely fellow was waiting for us in Roger’s field one evening when we returned from a few days away. As soon as we got out of the car he joined us in the courtyard with an air of “I wondered when you were going to show up” and quickly made himself at home, whilst returning to pay his respects to Roger several times a day.  Roger said he had just appeared out of nowhere and taken up residence in the barn, contentedly sharing accomodation and rations with the cats and treating Roger’s own dog Tango with suitable deference.

He was a beautiful dog, but a bit large and getting to look rather permanent so we made some enquiries. It turned out that his original owner, an elderly farmer living alone, had moved to a retirement home and had given the dog to his nephew in St Félicien.  City life held no charms for the dog however; he had set off in search of a home similar to the one he had always known and had fetched up chez Roger.  Happily a satisfactory outcome was found and residential arrangements made for him with a farming cousin.

We were a little sorry to see him go but we are realistic enough to know that it is just not practical for us to have a dog of our own, much as we would like one. So for the time being we enjoy someone else’s Best Friend tagging along with us for a while. 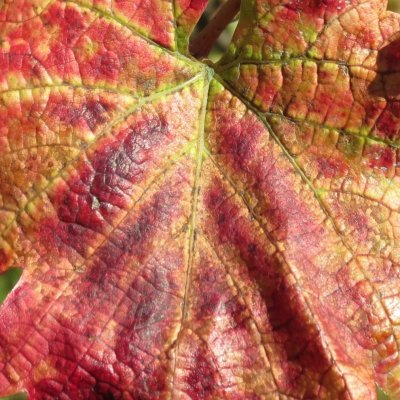 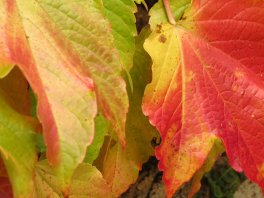 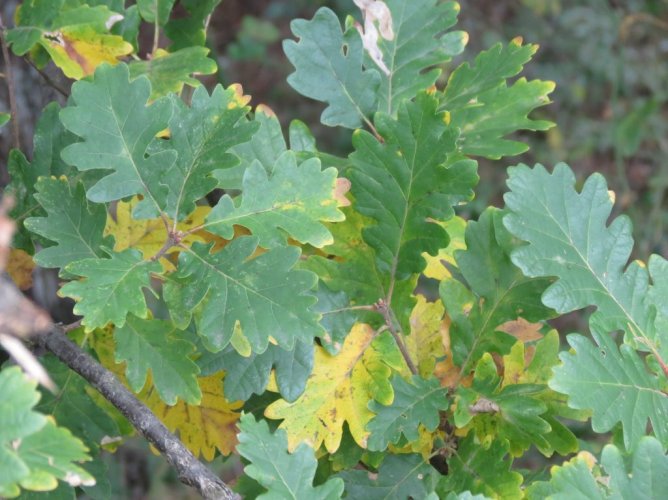 4 thoughts on “An Autumn Walk with Thunderpaws”