In between two episodes of Kate’s silk stories here is a short interlude. The protagonist is this rusty wheelbarrow that has been helping us right from the moment we bought Les Sarziers with all the big jobs.  It has transported cement bags, sand and gravel, stones, tiles and – in the garden – plant prunings, leaves, manure and compost.  And last week, like the autumn before, it helped us storing our fire wood. 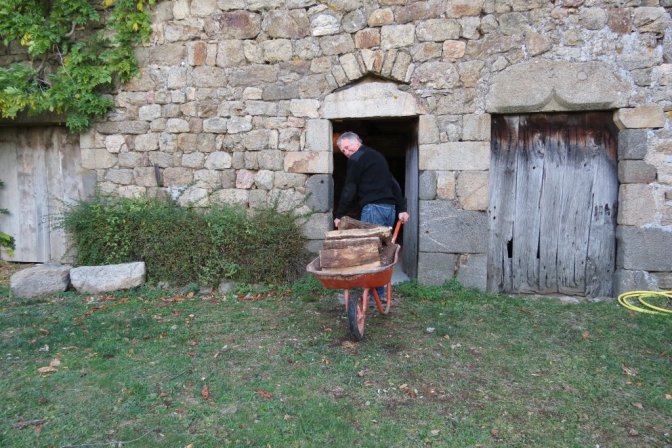 Last year’s log pile was starting to diminish as for the last two weeks the evenings have become autumnal and the nights longer and we started up our two wood burning stoves.

Our neighbour Roger’s nephew Dorian brought round a couple of tons last week, cut and split from timber that he had felled in the little wood below our garden, just as Roger used to do before he was reduced to crutches.

As we loaded the first of them into the wheelbarrow, Dorian stopped for a moment and bent over to look at the wheel. “Solid rubber? Haven’t seen one like this before.” I tried to explain – but utterly failed – why this is a special wheelbarrow, which started its life in Paris in 1980.

Well, since you ask …. below is a picture to prove its early glory.

Dorian won’t be interested, but perhaps some of the readers of this blog might be intrigued or even remember. It was our first show with our Theatre/Dance Company Reflux performed in the Théâtre de la Plaine in the winter of 1981. The show was called “Kaleidoscope” and as you can see, the wheelbarrow had a starring role – just don’t ask what the hell we were doing.

Later, for the more challenging building jobs we bought another wheelbarrow – a boring standard type with blow-up tyres.  It is still with us, but has had already several punctures and is NOT orange.  Here are some archive pictures of it in action, and as long as we have the strength to push it it will continue to be with us.

Leaving our personal memories aside, isn’t the wheelbarrow one of the cleverest inventions of human kind?  I just wish sometimes it had three more wheels and an engine!

One thought on “A short history of wheelbarrows . . .”