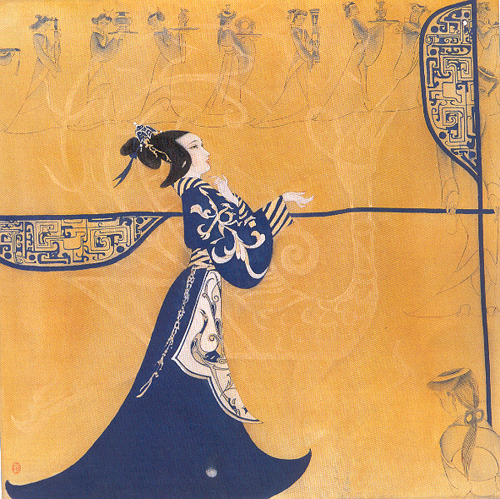 So to the history of silk itself.

For centuries two Oriental products exerted a fascination, not to say an obsession in Europe.  Porcelain and silk, because of their rarity, costliness and exoticism were both irresistible to the wealthy and fashionable who all hankered after these emblems of luxury and power.  By the 18thC fortunes were squandered on porcelain collections and the word “china” was used in England as a slang term for extravagance.

The European love affair with silk however extends much further back into history: first the Greeks and then the Romans were importing it from the Far East From the 2ndC BC onwards.  But for centuries in the West the mystery of how silk was produced remained complete, since Imperial Chinese silk workers were forbidden, on pain of death, to travel abroad.   The Romans believed that the thread was spun from the leaves of the “silk tree”, which idea, although fanciful, has echoes of the spaghetti tree April fool, broadcast by the BBC’s Panorama as recently as 1957.

A much older Chinese legend would have it that princess Leizu was sitting in the shade of a mullberry tree when a cocoon dropped into her hot cup of tea and started to unwind … and so began the domestication of our little friend Bombyx Mori and the beginning of  the saga of silk. 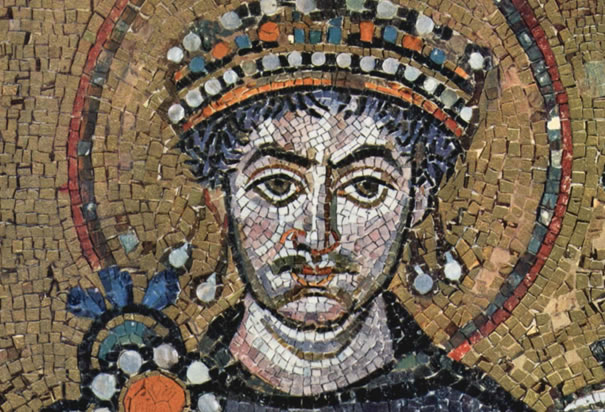 In the 6th C AD the Byzantine Emperor Justinian, fed up with the Persian monopoly of the silk trade, sponsored a feat of industrial espionage by sending two monks on a mission to China to steal silk worms.  They managed to hide several eggs and very young larvae in their hollow bamboo walking sticks, together with a supply of leaves, and the secret was out!

Silk vestments, draperies, tapestries and wall hangings – you name it, the rich and powerful all wanted it and when the Pope and his court set up shop in Avignon in the 14thC and stayed for nearly a century the demand for silk in France really took off.  In 1466, King Louis XI decided to develop a national silk industry with a view to reducing France’s trade deficit with the Italian states, which was running at some 500,000 golden écus annually. A royal manufacture and monopoly on silk weaving was established in Lyon, with the raw material imported through Marseille and along the Rhône, and it was not long before the regions along this route began to jump on the passing gravy train and start producing their own silk.  Four million mullberry trees were planted by royal decree in the Gard, Var and Vaucluse, but it was not until 1709, when a terrible winter killed the chestnut and olive tress in the Ardèche and they were replaced with mullberries, that sericulture spread into our area.  Silk production endured for three centuries and for a considerable period the Ardèche was the foremost producer of raw silk in France.

So here we are back at the farm magnaneries and the boiling cauldron in the courtyard.  To be able to weave with silk though, it is not enough just to spin the raw threads together.  The results tend to be uneven and the remaining sericin reacts badly when the silk is exposed to hot water, for example in a dye bath, when the threads are liable to unravel.  The solution is reeling, a process where the raw silk threads are twisted together mechanically.

Different degrees of torsion give different types of thread for use in such diverse fabrics as satin, with its smooth, brilliant surface, grosgrain and reps, which have raised ribs, jacquard and brocade where a design is woven into the material, or supple fabrics such as organdie, chiffon and crêpe.  The abandoned factories which are such a common sight in the innumerable river valleys of our area bear witness to the fact that the Ardèche was always the foremost region for this activity, representing 50% of the entire French total.  There are technical, geographical and demographical reasons for this, but I am afraid they will have to wait for a subsequent post, because I am about to go off on a tangent!

I have inherited  a considerable collection of vintage and historic clothing from my family – here is my mother’s wedding dress for example – and in cataloguing and researching the pieces, I became fascinated by the origins and different types of silk.  Or maybe my interest goes back further – to “The Tailor of Gloucester” to be precise.  I have always loved those opening sentences: “In the time of swords and periwigs and full-skirted coats with flowered lappets – when gentlemen wore ruffles and gold-laced waistoacts of paduasoy and taffeta . . . . he sewed and snippeted, piecing out his satin and pompadour, and lutestring; stuffs had strange names, and were very expensive in the days of the Tailor of Gloucester”  (and I note in passing that Beatrix Potter was as profligate with her use of commas as I tend to be myself!) 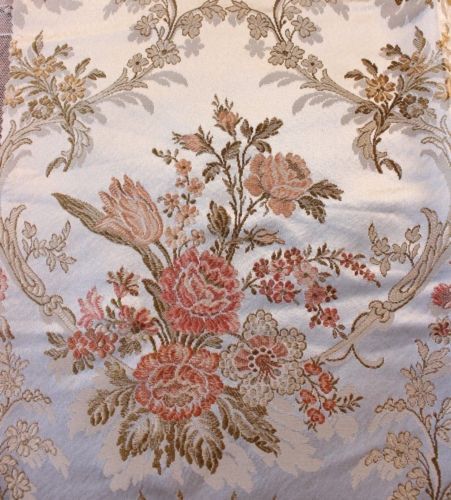 Those evocative names indicate that the silk fabrics were imported from Northern Italy and France, specifically from Lyon, which by the 16thC was the undisputed capital of the European silk trade, employing thousands of silk workers: the canuts.  Gradually designs evolved from the original oriental styles in favour of natural and floral motifs and the invention of the Jacquard loom in 1801 made possible the production of ever more beautiful and complex brocades and damasks, like this fabric used in a 19thC ball dress in my collection.

Fabric dyeing techniques helped drive the development of the chemical industry, which was already solidly in place by the mid 1800s and is still an important industry today, and by 1870 the silk industry accounted for 75% of Lyon’s total industrial activity, with about 100,000 looms in operation.

So it’s possibly far fetched, but I like to think that these two dresses might conceivably have been made with fabric which started out as a hank of raw silk, produced in the magnagnerie of an Ardèche farm just like ours.

To end this post, here is my late sister Margaret, wearing the ball dress to a dance in 1976. 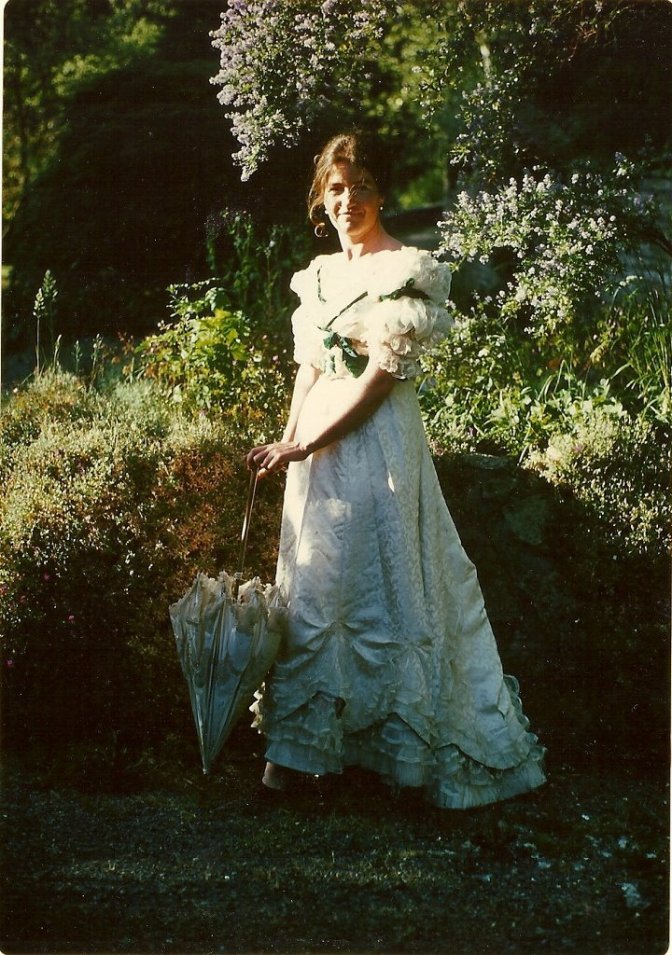 PS  I have made a complete catalogue of my collection and I am proposing to put it on line, since there are pieces which might be of interest for a conservation project or a heritage collection.  When I have done so I will post a link on this blog.