Finally, the answers!  Apologies for the delay, but here they are at last.  Many thanks to all of you who submitted entries, we were impressed by the clarity and detail of many replies – a lot of research had clearly been done and the level of entries was impressively high!

The stone is used to clean the mud off your boots before going inside. It can also be useful to help remove said boots if they get stuck. 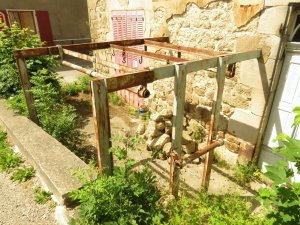 Oxen were led into this structure, strapped in and raised a little off the ground so that the blacksmith could shoe them in safety and comfort. This one is in the village of Grozon near us.

3  They are used on our little railway line to attach sleepers to the rails.

4 This is a winnowing machine, manufactured in Tarare, a small town north west of Lyon. We had an ancient one in our stable for years, but at the time of the Great Clear Out we broke it up and burned it. This is one of the parts that we kept and still use for sieving stones out of earth etc.

5 They are wedges to support a wine barrel. 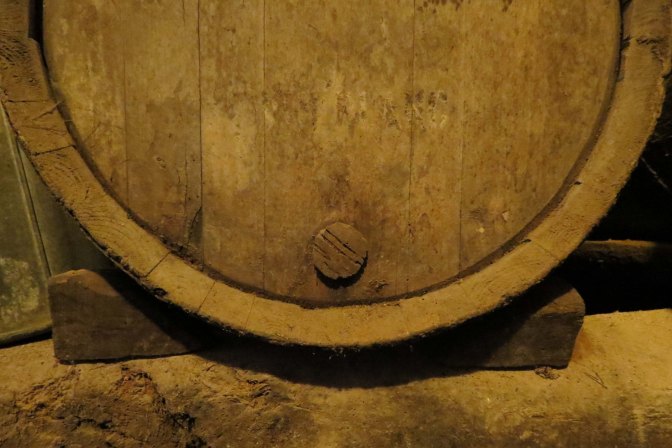 6 This is a high tech “canon à grêle”, (which Brice describes as un oeuvre d’art contemporain), designed to shoot shock waves into the atmosphere and disperse hail-bearing clouds which are a threat to ripening tree fruit, in this case apricots.

It replaces the former practises of shooting into the clouds with a rifle, or laboriously lighting little fires in tin cans placed foot of each tree. Apart from being hideous and intrusive they are causing a great deal of controversy on account of the noise they produce. (Fortunately none too close to us)

7 A is used to lift potatoes,

B several uses, including tracing lines for sowing seed.

C is a dibber for planting onions, shallots and bulbs of all kinds.

8 It is called a chevalet (or little horse), hence saw-horse in English, and is used to balance logs when sawing them. (Obviously not the ones stacked behind it!) 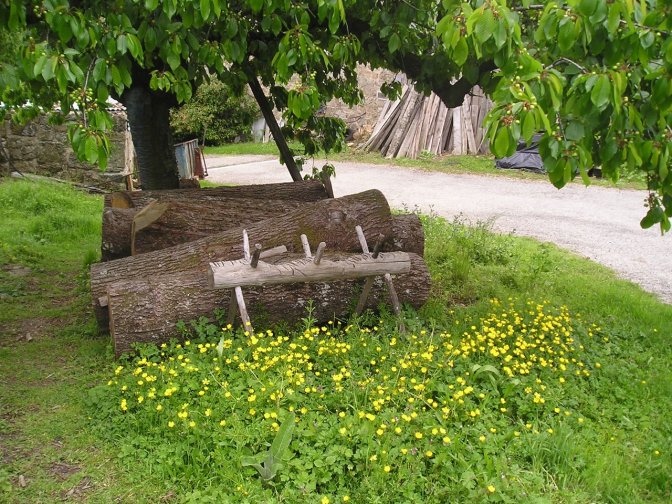 The same word is used for a painter’s easel and there’s an amusing moment in Welcome to the Free Zone (p 69) where a flustered Delphine confuses chevalet and chèvre (goat), which Bill cleverly translated as easel and weasel:

‘Excuse me, Madame,’ said the newcomer, whose voice was that of a woman despite the man’s trousers, ‘I’m looking for someone who’s supposed to be round here. Maybe you’ve seen her go past! A young blonde woman, quite tall, with an easel.’

‘A woman? With a weasel?’ repeated Delphine, stunned. ‘No, I haven’t seen anyone, I’m sure. Especially with a weasel… anyway, there aren’t any weasels round here…

9 This wire basket is for collecting and transporting eggs.

10   This door protects the access to a “source captée” or capped spring.

These are very common around here and serve as a reliable water supply for more isolated properties. The door opens to a stone lined passage, which can be up to 20m in length, leading to a chamber, beautifully constructed of stone, occasionally quite elaborate, on two levels, which constitutes a small reservoir.

Every farm once had their range of clapiers à lapins and rabbits were bred and fattened up as a manageable source of meat. Our neighbour Mme Banchet used to show us her rabbits with pride, announcing that “à deux kilos cinq on les fait à la barbecue!” * However she was much too soft-hearted to kill them herself and one of her neighbours had to come down from the side valley on his Solex to dispatch them for her!

In Honourable Third Place and Highly Commended:  The Swiss Team – Vreni and Jürg

In a Very Strong Second Place, (making good use of their local knowledge, despite the handicap of The Wrong Language and with a special commendation for facetiousness): The Local team – Brice and Lisa

In an Unassailable First Place, the winners of our Mid Winter Quiz are:  The Welsh Team – Jane and John.

Congratulations to our winners and thank you all for playing our Mid Winter Quiz!