To steal a phrase from Garrison Keillor, it has been a quiet week at les Sarziers . . . .

On Thursday we played an Apéro Swing in Vernoux for Emilie and her dancers, which was a lot of fun.

The next day it was time to get started on the elderflower syrup.

Then the weather suddenly turned boiling over the week end and it was both a real pleasure and a relief to spend a day in Brice and Lisa’s wine cellar helping them to bottle 600 litres of Cuvée Morlanche 2018.

But the highlight of the week definitely came yesterday afternoon when we were able to help our friends Catherine and Robin, from the nearby village of Bozas, to walk their three donkeys and one horse to their summer quarters.

They were running out of grass at home  – apparently Pomme the mare never stops eating – meanwhile Brice and Lisa have a lovely little sloping meadow, either side of a stream, which is just crying out to be munched. So it was arranged that the animals should take up residence at Morlanche for a few months. Robin had fenced off an area for them and all that remained was to walk them from B to A. 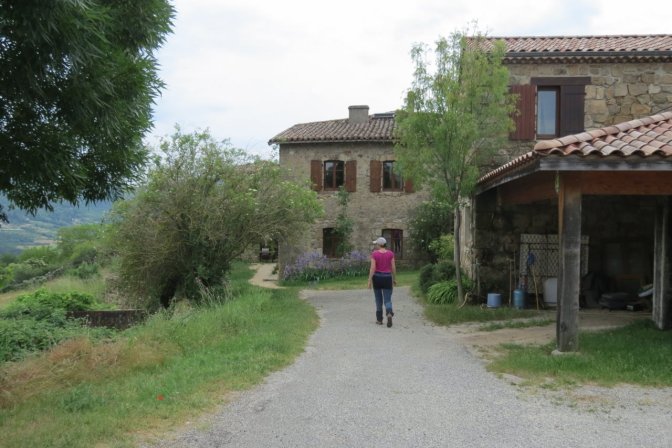 When we showed up at their place, Couette et Tartine, Robin had got all the animals penned into a small enclosure. He told us that they seemed a little anxious, not sure whether they were going to end up “en sauce” as he put it, but otherwise ready for departure.

He himself took Pomme the mare, Catherine walked with Pilou, Markus had Django, I led his mother, Babou, who was said to be docile (“une crème” affirmed Catherine) and off we went.

The distance by road is 4 miles, but we took a much more direct series of tracks, some of which we had never walked before. Robin told us that this was once the route between the upper farms between Bozas and Arlebosc but, as was so often the case, when it came to deciding which ones to maintain and surface for road traffic, the longer routes with less steep gradients were often preferred. Incidentally, we learned recently that as late as the 1960’s only 20% of the roads in the commune of St Basile (the setting for much of Welcome to the Free Zone) were tarred, which would explain why the occupying German forces rarely ventured into the more remote locations and hill farms. 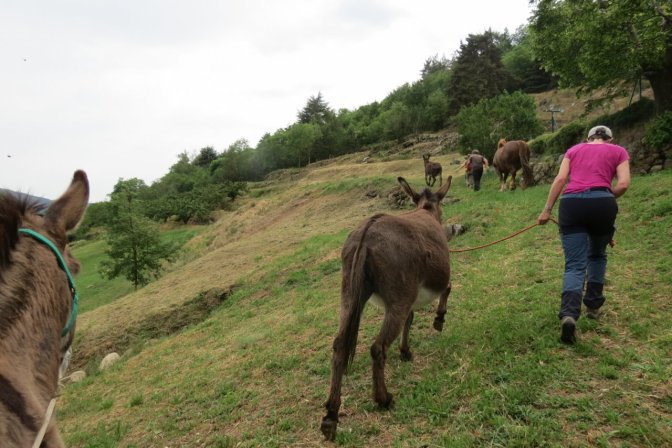 The route was enchanting, and the donkeys behaved beautifully for the most part, walking along steadily with occasional halts to get their breath and admire the scenery and sneaking a quick munch of tempting lush grass, clover and wild flowers as they passed. There was a bit of pushing and shoving, especially on narrow downhill stretches, but nothing too alarming and our fears that we wouldn’t be up to the task proved unfounded.

Roger told us that Robin and Catherine’s farm was once home to a famous bull and he remembered frequently walking the route as a young man in order to borrow the bull to put in with his cows. This was of course common practice in the past but only a few years ago a very old lady, who lived alone with her animals in an extremely remote farm in the hills above the village, told us that an equally elderly farmer, hearing that she was looking for a billy goat to put with her little flock, walked 10 miles over hill and dale from the village of Paiharès to bring the bouc to her farm.

Our walk took less than a couple of hours, but it was a wonderful experience. The countryside is looking glorious at the moment, and we passed a couple of farms garlanded with roses and irises and basking in the sunshine. There were also some furious dogs, (mercifully on chains) but everyone arrived safely to be welcomed by Brice and Lisa. 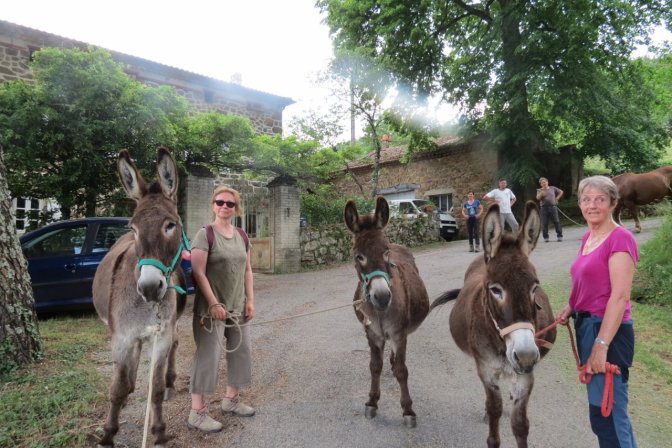 The animals quickly took possesion of their new home and after some pretty enthusiastic intitial grazing, set off to explore, led by Pilou, whilst we all settled down with a glass of Morlanche and reflected on the many quiet pleasures of living in the middle of nowhere.