I remember Kurt Weill’s music getting under my skin years ago in Paris when a choreographer I was working with used some of his compositions in a piece we were creating. Not that I really took my interest any further, some songs like Surabaya Johnny, Nanas Lied and others were sitting there in my ‘back catalogue’ (Markus says that I have a memory for songs like a juke box!) and I had a fantasy that one day I would be able to perform them, but no idea how that could actually happen. The fact that my dream has become a reality is down to a number of amazing people, but nothing would have been possible without Markus and Linda.

Linda has made several appearances in this blog, but usually in the context of her husband François the bass player. She is a wonderful and amazingly versatile pianist: from jazz to funk from Liszt to bebop, she’s up for everything. She is unassuming, supportive and generous and also a very hard worker: as you can imagine she is much in demand.

A year and a half ago I mentioned my dream to Linda after a rehearsal for a jazz gig and she said, “Oh I’d love to come and hear some German songs, that would be great.” So I plucked up my courage, looked her straight in the eye and said “Would you be my accompanist?” And that is how the adventure began.

In fact, I had at first imagined just voice and piano, but it soon it became clear that that was not going to do justice to an extraordinary composer like Weill and this is where Markus stepped in. He said we needed a band – well he would, wouldn’t he! – and started putting one together. His first success was getting François on board. François is a very busy musician and more into bebop and modern jazz but after some initial hesitation (he said he didn’t much like German) he agreed to join us. Then Markus enlisted the lovely, scatter-brained and hugely talented Nico on drums and we started to search for a cellist. Professional cellists who are willing to go out on a limb are not that easy to find but finally, in January we met Pascal, head of a local music Conservatoire, member of a number of string ensembles and up for joining our project. Markus would be on trumpet. We were off!

Now what was needed was to create the repertoire, and . . . . to find the music. The first part was easy, Markus and I spent the long winter evenings researching, listening, choosing, deciding on pitches and gradually an idea began to take shape in our heads. It was so exciting to be back in the creative process of making a show from scratch, something I thought we had left behind after “Blue Champagne”, our last show together with Reflux in 1986. 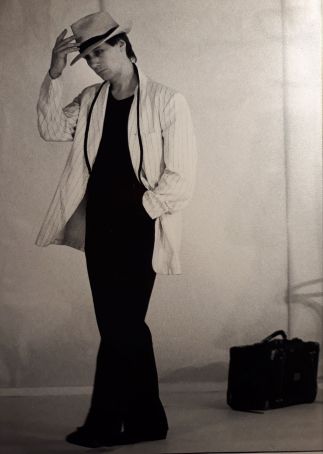 The scores were another matter altogether, since almost nothing is available in written form. So Markus embarked on a monumental task of transcription, harmony and arrangement for the different instruments. I had absolutely no idea that he could do that, and most of the time, no idea what was actually involved. It was only when we came to rehearsing, first with Linda and later with Linda and Pascal, that I grasped just how challenging Weill’s music is. I have a good ear and can navigate weird intervals with practice, but it was much tougher for the ensemble. Markus and the other musicians were frequently to be seen tearing their hair out and exclaiming “no, it’s not wrong, it’s just Weill!”, whilst commenting approvingly on the composer’s fascination for the 6th interval and his unexpected chord changes.

In order to create the different moods and atmospheres we wanted we could have done with a small orchestra, but Markus gradually whittled things down to get the sound he was looking for in each number. It did mean however that he had to learn to play the banjo and to pick up his sax again after 20 odd years! We asked Linda to play melodica on one number, Nico added bells and gongs to his drum set and we also enlisted our Dorset friend Richard to record the accompaniment to Salomons Song on one of his harmoniums (the French one, called Hortense).

Meanwhile we were having ideas for a theatrical style and a theme which would link the musical numbers and engage an audience who would not necessarily understand the texts in German and English. We decided on the notion of a concert-spectacle, which would take us on a journey from the Berlin of the interwar years to New York, where Weill spent the last 15 years of his life, taking its colour from the political and artistic upheavals of the period.

We wrote short linking texts and introduced some very theatrical elements to keep the show upbeat and constantly evolving. I tracked down costumes on the Oxfam website, (thank you Jane for the tip), and even got the band to don shiny red waistcoats and pink bow ties for the American numbers!

We actually had very little opportunity to rehearse with the whole group, due to everyone’s busy schedule, but we managed to get together with Linda once a month and in June (during that epic heatwave) had a three-day intensive rehearsal period with her and Pascal, which was really inspiring and great fun.

But we never would have got the show on the road if Markus had not negotiated a brilliant arrangement with the theatre in nearby Vernoux under which we had the whole theatre to work in for four days, plus the services of a professional technician, in return for a public preview of the show at the end of the residency. We all worked immensely hard and the result was a triumph, so much so that it looks as though we might be invited back for a short run next season in this really lovely venue. We couldn’t help contrasting this experience with our memories of working in Paris, where there is so much demand for rehearsal and performance space that it would be unthinkable to be offered such an opportunity. In addition we can’t imagine having been able to find such a bunch of talented professional musicians willing to take part in our project. Who says culture is dead in the sticks!

So to sum up: after two further performances in our barn we have been overwhelmed by the response and positive feedback from our audiences. Linda surprised herself by playing the melodica lying flat on her back for Alabama Song, Nico performed as the heart throb in Surabaya Johnny, François decided that actually he was wrong about German, Pascal moved people to tears with his take on Youkali, I got to wear slinky sequins and sing 14 numbers, each more challenging and rewarding than the last and Markus excelled himself in every possible way – as musical director, mastermind of the rehearsals, composer, arranger and performer – he was brilliant!

There are more dates in the pipeline and I for one can’t wait!