Due to an operation on my hand, Kate is doing all the driving for a month, which gives me the opportunity to admire our beautiful landscape and to appreciate the marvellous engineering of our roads. Just for fun I started to count the bridges that we cross on our different runs to Lamastre, St.Félicien, Tournon and Valence. For example on the short trip to Lamastre, which is just 6 miles, we cross 9 brooks or rivers. Intrigued, I checked the Internet about the number of bridges in the whole of the Ardèche and it transpires that there are 2345 bridges included in the departmental road system. That excludes all minor roads, village streets and hiking paths. 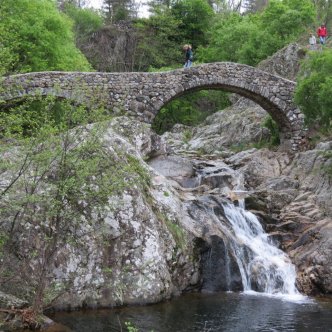 There are in fact more bridges here than in the Alps. The reason – expressed in the language of a kindergarten-geologist – is that the glaciers scooped out motorways in the Alps, whereas erosion in the Ardèche had to fight against hard crystalline rock, thus creating a topography resembling the teeth of a comb. 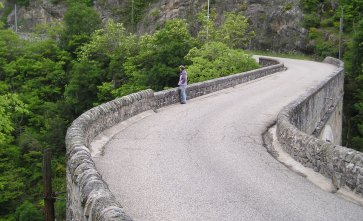 Crossing the Doux on the way to Tournon

Crossing the Doux on the way to Tournon

As the Romans were keen to get from Marseilles up North, there are several Roman bridges in the Ardèche – or at least several which are called Roman. Traditionally, old looking bridges are very soon qualified as Roman, but in fact there are only two still in use. The language of course does not help: roman in French is Romanesque – romain is Roman.

Then there are a great number of medieval bridges, including the one closest to us crossing the Doux to Boucieu-le-Roi. Once a Roman bridge, the present construction dates from 1492 – that is not counting the bits that fall off when big lorries get stuck on it (last patched up in 2017).

Very often while hiking one comes across an old bridge in a remote places.

The picture above is of a bridge near St. Félicien and is at the moment our favourite one. It is on the old path between St.Félicien and Nozières and only about 6 miles from Les Sarziers. We discovered it only last year, when we were asked to mark a path for the Tourist Office. 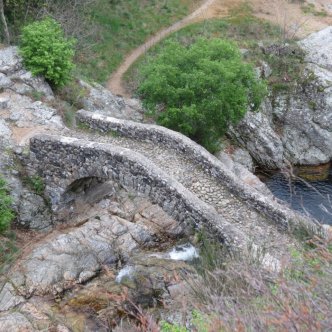 We have walked across some extraordinary bridges in the South Ardèche, many of them spectacular and often built in impossible places. Some we are told have had the generous assistance of the devil. (As a Swiss I do feel obliged to inform you that there is only one genuine Devil’s bridge in the world, which crosses the Reuss on the St.Gotthard pass road. The others are all fake and the guy they thought was Satan was a farmer with a strange hair style and a pitch fork).

The Ardèche boasts two famous inventors. In the 18th century, Monsieur Mongolfier from Annonay invented the hot air balloon. It is not clear whether his invention was prompted by the winding roads, and whether he thought that if everyone had a hot air balloon you could stop building bridges. Anyhow we are very proud of him and so was the king of France.

Some 30 years later Marc Seguin, his somewhat more down-to-earth great-nephew, turned his attention to bridges and came up with the suspension bridge. Admittedly the concept was not completely original, as there were already chain bridges in the States and in Great Britain. What was new was the use of steel cables instead of chains. His first big bridge was built across the Rhône between Tournon and Tain in 1825, and his design became the prototype for the whole of France.

Spanning the Rhone is quite a feat and worthy of another post.  But tucked away in our side valleys, small ones like this will do. 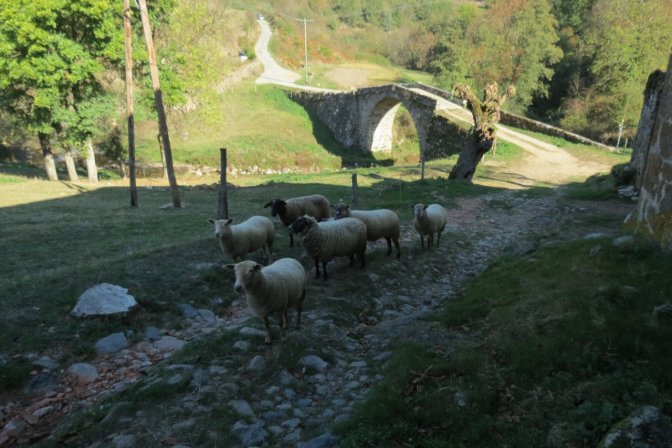